Ducati is thrilled to announce a new global licensing agreement with Spin Master Corp., one of the leading companies worldwide in the children’s entertainment sector, for the creation and distribution of a series of Meccano model sets dedicated to the iconic Italian motorcycles. 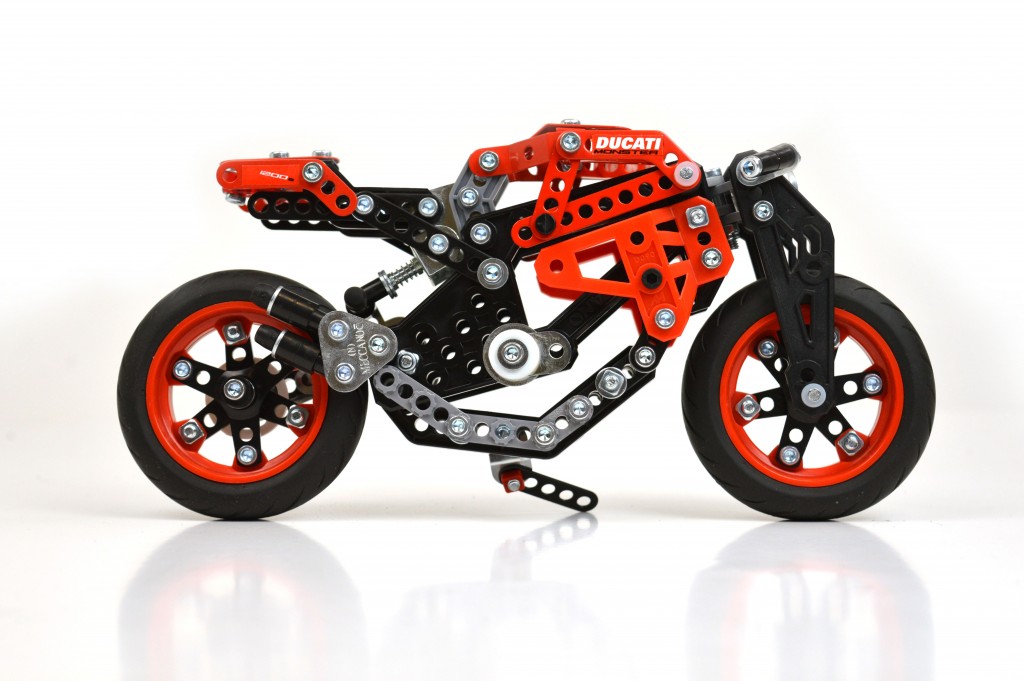 Ducati makes its Meccano debut with the Ducati Monster 1200 S Build and Play. The detailed set features coil-spring suspension, multi-piece wheels and real steering for an authentic experience at a small scale. No detail of Ducati’s exceptional design has been missed, from the functioning kickstand to the side-mounted staggered shotgun exhaust. The model is an easy-to-build project for fans as young as 10 and is made up of more than 290 parts, in Ducati’s eye-catching red design.

The Ducati Monster 1200 S Build and Play set is already available at toy and hobby shops. 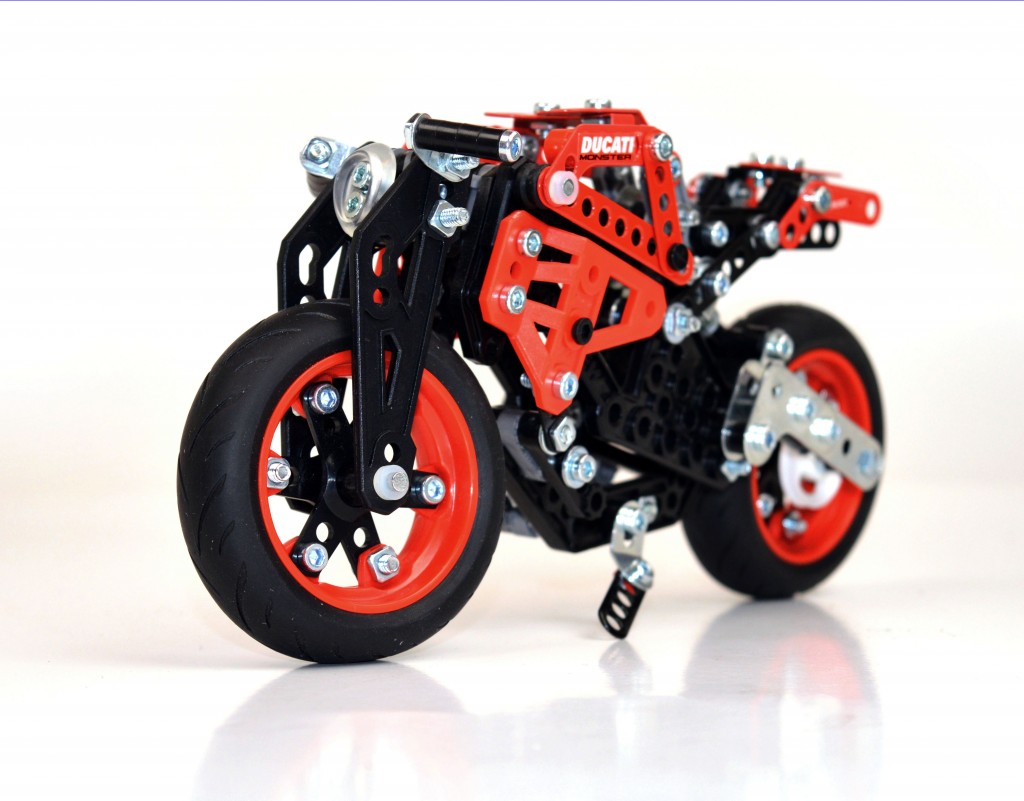 “We are delighted to announce this new licensing agreement, which will allow us to develop Ducati motorcycles in the distinctive Meccano style”, stated Alessandro Cicognani, Ducati Licensing Director. “I’m sure that Ducati fans of any age will have a lot of fun playing with the Meccano Build and Play series.”

“Meccano and Ducati are both legendary brands with legions of fans around the world and we’re excited to bring these two icons together for the first time”, said Ben Gadbois Global President and Chief Operating Officer, Spin Master Corp. “The Meccano Monster 1200 S model has the unmistakable design and distinguishing features that visibly communicates the sophistication, timeless quality and uniqueness of a Ducati.” 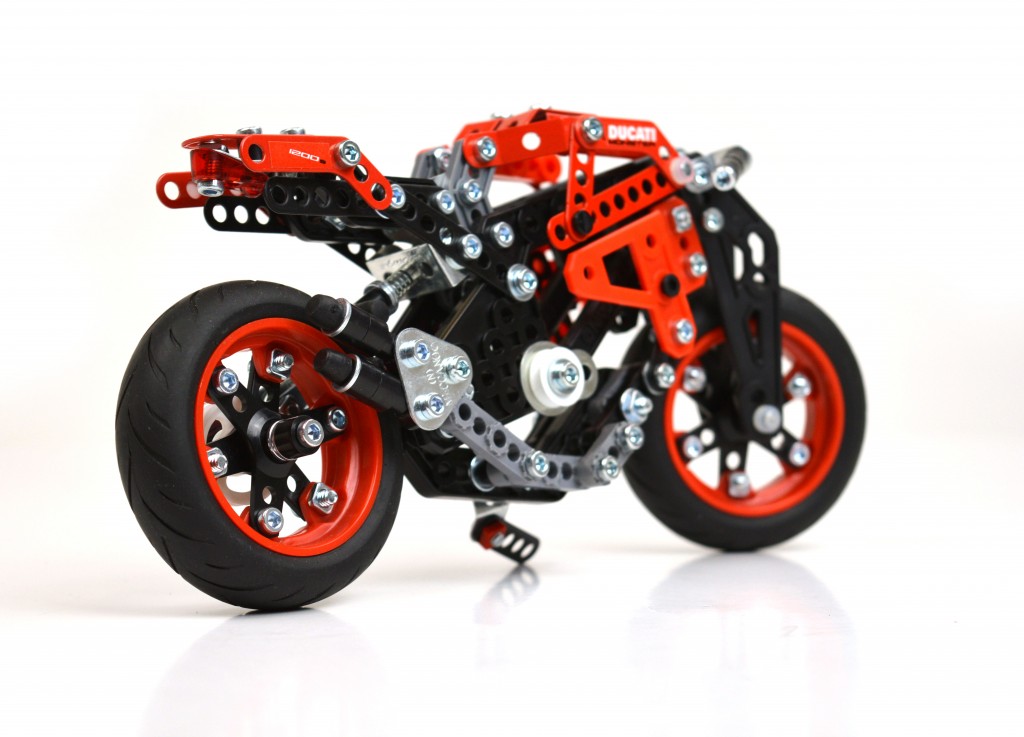 Ducati Motor Holding S.p.A. – A Sole Shareholder Company – A Company subject to the Management and Coordination activities of AUDI AG

Founded in 1926, since 1946 Ducati has been producing sport-inspired motorcycles characterised by high-performance Desmodromic engines, innovative design and cutting-edge technology. Situated in Bologna, the factory is located in the Borgo Panigale district. The model range covers several market segments with the following families: Diavel, Hypermotard, Monster, Multistrada, and Superbike. In 2015 Ducati presented the Ducati Scrambler: a new brand made of bikes, accessories and apparel that provide the last word in creativity and self-expression. These authentic icons of “made in Italy”, together with an extensive range of associated accessories and technical and lifestyle apparel, are distributed in 90 countries around the world. Ducati competes in both the World Superbike and MotoGP World Championships. In Superbike Ducati has won 17 Manufacturers’ titles and 14 Riders’ titles and in 2011 passed the historic milestone of 300 race victories. Ducati have participated in MotoGP since 2003, winning both the Manufacturers’ and Riders’ titles in 2007.

Spin Master Corp. (TSX:TOY) is a leading global children’s entertainment company that creates, designs, manufactures and markets a diversified portfolio of innovative toys, games, products and entertainment properties. Spin Master is best known for award-winning brands including Bakugan, Air Hogs®, Spin Master Games™ and the 2015 Toy of the Year, Zoomer™ Dino. Since 2005, Spin Master has received 63 TIA Toy of The Year (TOTY) nominations with 14 wins across a variety of product categories . Spin Master has been recognized with 12 TOTY nominations for Innovative Toy of the Year, more than any of its competitors. Spin Master is among a limited number of companies that not only develop and produce global entertainment properties, characters and content, but also monetize that content through the creation, sale and licensing of products. To date, Spin Master has produced five television series, including 2007 hit series Bakugan Battle Brawlers™ and its current hit PAW Patrol, which is broadcast in over 160 countries and territories globally. Spin Master employs over 950 people globally with offices in Canada, United States, France, Italy, United Kingdom, Slovakia, Germany, Holland, Mexico, China, Hong Kong and Japan.