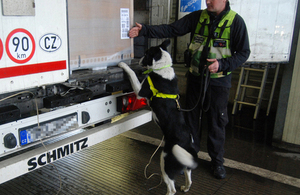 Cross-Channel passengers planning to travel through Calais are advised to check online with their travel operator. Information about alternative routes and operators is available via this interactive map.

There is an ongoing possibility of disruption to cross-Channel services as a result of industrial action and migrant activity in and around Calais.

If you are in the UK and have a booking, check online with your operator for more information before you leave and consider making alternative arrangements if necessary.

Cross-Channel passengers travelling from Dover/Folkestone to the Port of Calais are advised to check online with their chosen operator and plan their journey to avoid disruption. You may also want to follow local radio for travel updates. Information about alternative routes and operators is available via this interactive map.

If you need to exchange travel tickets, contact your operator. For advice on compensation and your rights, visit the ABTA website.

Read guidance on EU Regulation 1177/2010, which establishes the rights of all maritime passengers to assistance in the case of delayed or cancelled departures.

DFDS Seaways also operates out of Amsterdam, Dieppe and Dunkirk:

P&O Ferries also operates out of Rotterdam and Zeebrugge:

Other cross-Channel operators and routes

Details of alternative routes for returning to the UK. Check availability and book ahead before considering travelling to another port of exit.

Condor Ferries operates out of St Malo and Cherbourg:

Stena operates out of Hook of Holland:

What the government is doing

We are working closely with the French government to seek an urgent return of normal services. We have also increased security and Border Force operations at the port.

We continue to closely monitor the situation and will update travel advice accordingly.

The government’s COBR emergency committee has met to discuss the situation in Calais and review implementation of our contingency plans. On 31 July Prime Minister David Cameron chaired the COBR meeting and announced additional measures to strengthen security at Coquelles and alleviate pressure on the road network in Kent caused by Operation Stack.

Law and order in and around Calais is the responsibility of the French authorities, but the UK continues to work with its French counterparts to strengthen the security of the border to stop migrants entering the UK illegally.

Border Force put its well-rehearsed and practised contingency plans into operation to ensure security is maintained during this period of disruption to cross-Channel services and as they return to normal. We have deployed additional Border Force staff and sniffer dogs in northern France as well as bolstering screening checks at Dover for both tourist and freight vehicles. This is on top of already rigorous border controls, which include 100% freight screening at Coquelles and Calais.

More than 39,000 attempts to cross the Channel illegally were prevented in 2014 to 2015 – more than double the previous year.