The new Multistrada 1200 Enduro is one of the ‘stars’ of the Ducati stand at EICMA 2015 – a constantly packed stand brimming with great new bikes. From now until Sunday 22 November, Hall 15 – Stand M04 will be exhibiting four bikes with different set-ups, allowing visitors to the 73rd edition of EICMA to get a first-hand look at the different set-up possibilities provided by this new Ducati-built maxi-enduro. 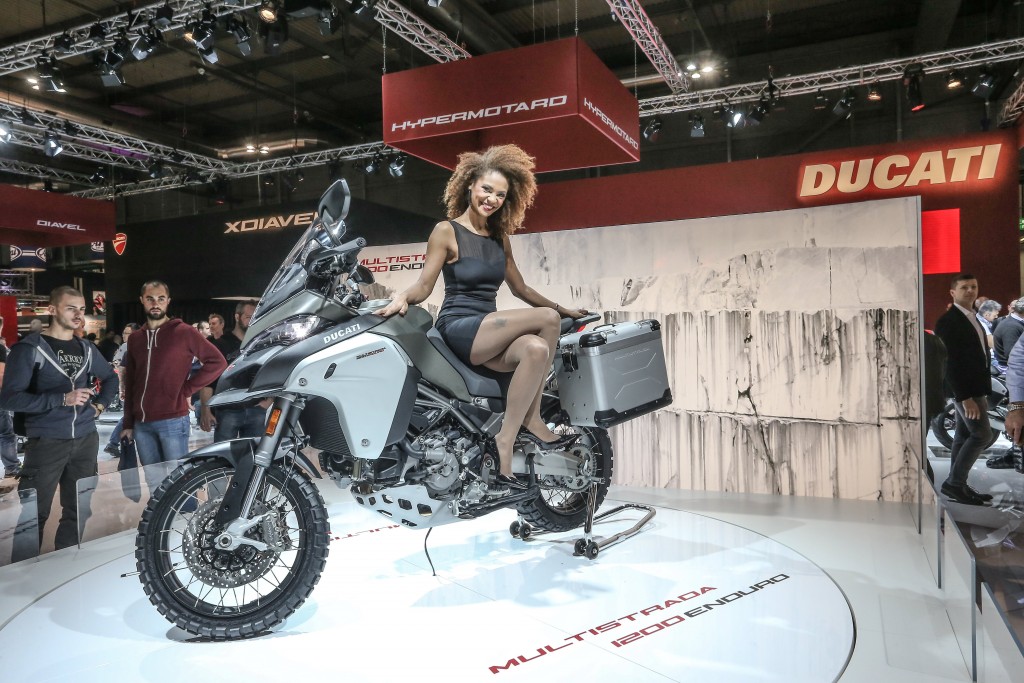 Taking centre-stage on a rotating platform is the Multistrada 1200 Enduro in Phantom Grey, equipped with a touring package and Pirelli SCORPION™ Rally tyres. This set-up includes aluminium Ducati Performance panniers by Touratech, a bar bag and heated grips.

EICMA 2015 will also be showcasing, in addition to a non-accessorized red Multistrada 1200 Enduro, a globetrotter version of the bike in Star White Silk, equipped with a Touring package, tubular steel engine guard, supplementary lights and a low seat. Lastly, for hardcore off-roaders, a fourth Multistrada 1200 Enduro, again in Phantom Grey, will be on show: this features the high seat, the “Slim” passenger seat to allow easier rearward movement when riding on the pegs, the low screen, type-approved Termignoni silencer, a brake disc and sprocket guard plus mesh protection for water and oil radiators. 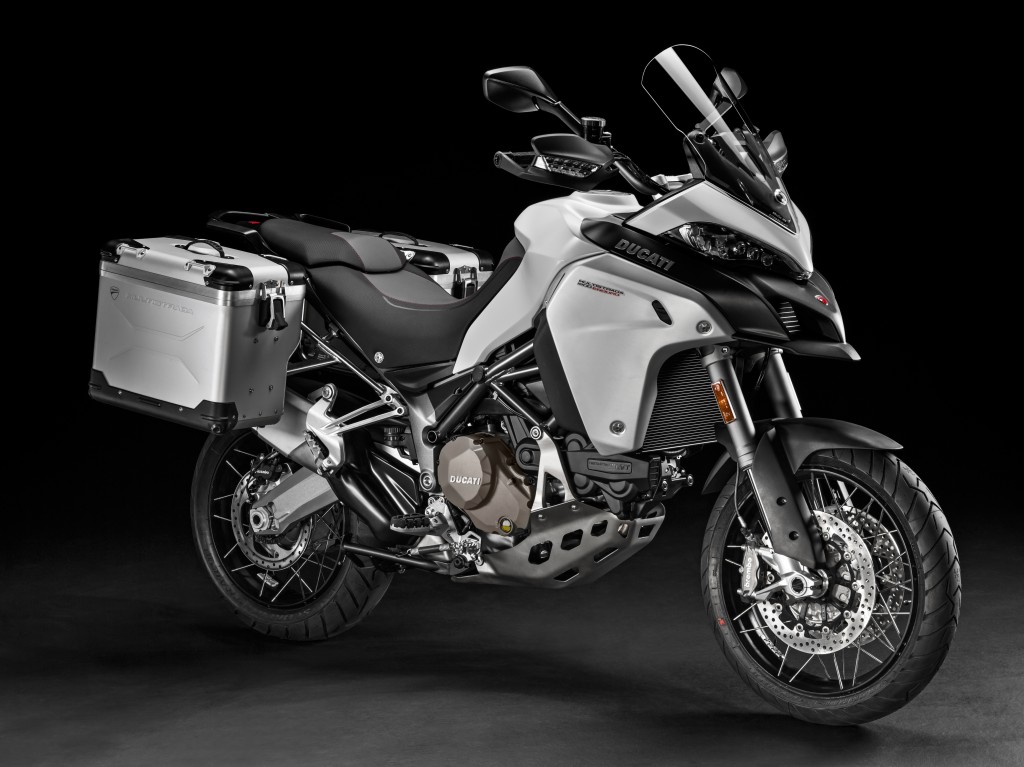 The Multistrada 1200 Enduro is a born explorer, designed to be unstoppable on any terrain. Built to withstand the stresses and strains of off-road riding, it mounts spoked wheels, 19’’ at the front and 17’’ at the rear. The Multistrada 1200 Enduro is a full-optional bike designed to satisfy even the most demanding globetrotter. It features electronic semi-active Sachs suspension (front and rear) and a 30-litre fuel tank to guarantee a range that can exceed 450 kilometres. On the Multistrada 1200 Enduro ABS Cornering, Cornering Lights (DCL), Ducati Traction Control (DTC), Ducati Wheelie Control (DWC) and the semi-active Ducati Skyhook Suspension (DSS) Evolution system, with 200 mm of wheel travel, all come as standard. Moreover, Vehicle Hold Control (VHC) has been introduced to aid uphill starts. 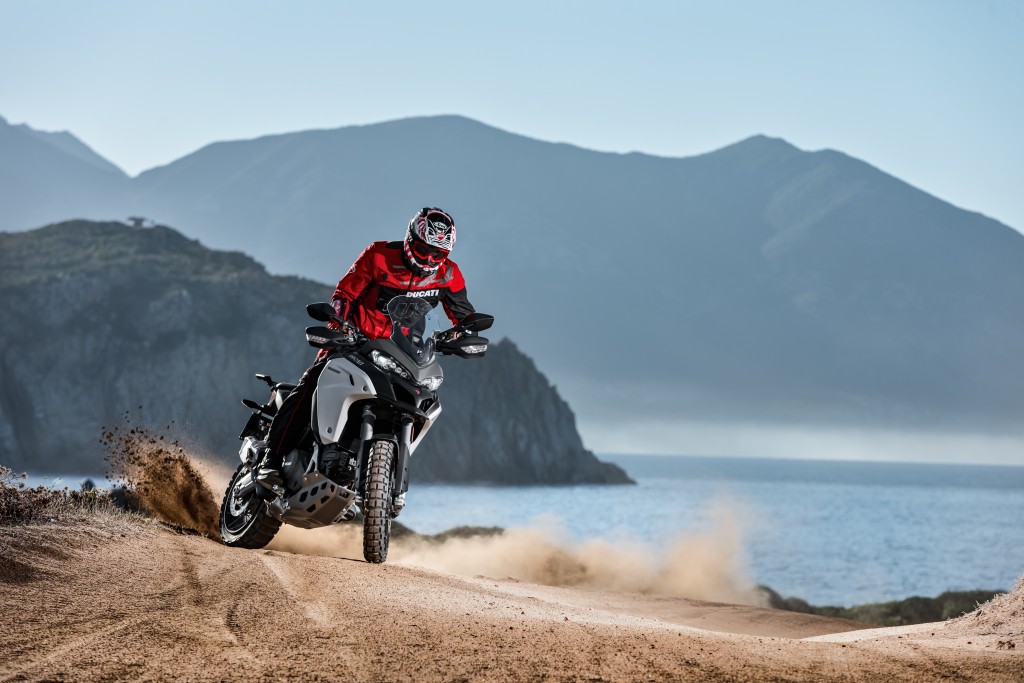 In addition to bikes and accessories, Ducati has also brought along its new apparel line dedicated to the Multistrada 1200 Enduro to EICMA: for example, the Enduro jacket and trousers jointly developed with Scott, specially designed for riders with a taste for adventure, both on-road and well off the beaten track.

Ducati is at EICMA with no less than 1,300 square metres of exhibition space on which, in addition to the Multistrada 1200 Enduro, visitors can get a good look at the all-new XDiavel Cruiser, the 959 Panigale sports bike and the Multistrada 1200 Pikes Peak plus the renewed adrenalin-packed Hypermotard 939 family, also available in the Hypermotard 939 SP and Hyperstrada 939 versions. These new bikes are also joined by the new Monster 1200 R, presented at the last Frankfurt fair. Furthermore, the Ducati Scrambler area, covered with 280 square metres of synthetic grass, will be showcasing the new Sixty2 and Flat Track Pro versions, thus bringing the number of new 2016 bikes unveiled by Ducati to eight.